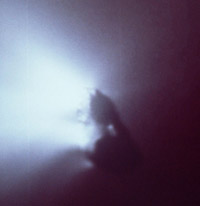 Image of the nucleus of Comet Halley as viewed by Giotto

An activity by Padi Boyd

related to the song:
'A Little Bit of Rock'

If you're a comet, it's what you're made of that matters. The chemical composition of comets - the ratio of ices to dust - helps place limits on theories of their origin. To contain so much ice they must have formed in the cooler, outer regions of the early solar system. Their spectacular tails in the night sky are the result of sublimation of the ices, and of outgassing from the irregularly shaped nucleus. Each time a comet passes by the Sun, more gas is stripped from the nucleus than dust. Since ice is very bright and reflective, while carbon dust is dark, older comets have darker nuclei. The nucleus of a comet is not very dense: current estimates are about 1.5 g/cm3 - not much denser than ice!

Since most of the materials in a real comet are easy to obtain, it's straightforward, and fun to build a scale model of a comet in your classroom!

This recipe makes a 15-cm comet with chemical composition very close to that found in actual comets in the solar system. It is a scale model. You would need to scale the diameter by 100,000 to reach the size of the nucleus of Halley's comet.

Materials Needed Before You Start:

Each group making a comet should collect the following comet components:

NOTE: Everyone handling the dry ice during mixing should wear gloves!

This activity was adapted from a comet recipe developed by NOAO and found at: http://www.noao.edu/education/crecipe.html