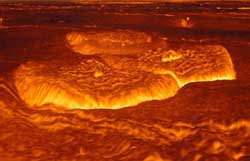 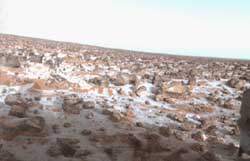 Not Too Hot, Not Too Cold, But Just Right!

An activity by Padi Boyd and Libby Truelove

related to the song:
'Habitable Zone'

Standards: physical science (matter exists in one of several states---solid, liquid or gas, depending on the temperature), measurement, following directions.

Adaptation: for younger children, the teacher will need to produce the fondue, as it requires working with a heat source. The Ziploc ice cream, on the other hand, can be made by students of all ages.

Engagement: Listen to the AstroCappella song Habitable Zone by the Chromatics. What does the song mean? Could people live on Venus and Mars right now? Why or why not? Have the students make suggestions for a list of differences between the Earth, and Venus and Mars. Did they remember that the oceans boiled off Venus because it is so close to the Sun? What about Mars having ice caps, but dry river beds? Did they remember it's a freezing place now? Now think about the Earth. What do we find all over the place on Earth? The surface of the Earth is covered mostly by water. What do we know about the distances of Venus, Earth and Mars from the Sun?

Today's activity is a tasty way of thinking about how lead, which is a solid metal on Earth, could melt and become metal on Venus. We'll also discover why we have liquid water oceans on Earth, while on Mars all the water is frozen in the ice caps. We'll be able to appreciate our very special place on Earth right in the Sun's habitable zone, where water can exist as a liquid. (And we'll get to appreciate some other special features that are only found on Earth, namely chocolate and ice cream!)