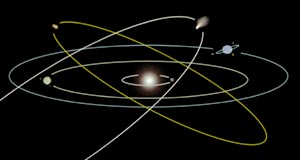 related to the song:
'Dance of the Planets'

In these activities, students take on roles as members of the planetary science community to investigate planets outside our own solar system. Students first become familiar with the important properties of orbits in our own solar system, namely the distance from the Sun of Earth and Jupiter, and the relatively low eccentricities of their orbits. Next, students see how ellipses can be drawn with string and two push-pins which serve as the foci of the ellipse. Basic properties of ellipses are reviewed. Students then use data obtained from planetary systems outside the solar system to plot the orbits of planets around their stars. Finally, students are asked to compare the orbits of planets around other stars to planets orbiting around the Sun, and draw conclusions about conditions on those planets.

In this activity, students will produce a portrait of the Solar System with distances scaled accurately. They can then study this portrait to learn basic information about the distances between planets and the planets' distance from the Sun. See also: Build a Scale Model of the Solar System.

Using real data from two new planetary systems discovered around neighboring stars in 1995 and 1996, students will compare the orbit paths that each travels as they revolve around a central star. They will compare and contrast their results to the data obtained from our own solar system, analyze each orbit path, and compare their size, shape, and eccentricity.

You are a NASA scientist working on our solar system. Your task is to create a scale model of the distances between planets and their distances from the Sun. In our solar system, each planet orbits the Sun on the path of an ellipse. An ellipse is similar to a circle but has one axis longer than the other. Any orbit can be characterized by its distance from the Sun and its period of revolution. In the case of the earth, the distance from the Sun is 93 million miles and it takes one year (3651/4 days) to complete one revolution about the Sun. When you create your scale model, you will use the earth's period and distance from the Sun to scale the orbits of the planets.

In your journal, draw your prediction of how our solar system is arranged as the planets orbit the Sun. Be sure to include the number of planets and their names, the order in which they are arranged, and how large you think the distances between the planets are.

You will be working with other NASA scientists to gather data pertaining to the distances each planet is from the Sun. Your team will consist of four members. Each individual in the group will have a specific responsibility based on the following jobs.

How did the solar system form? Do other stars in our neighborhood of the galaxy have planets orbiting them? In order to understand these fundamental questions (Where did we come from? Are we alone in the Universe?), we must learn everything we can about our solar system. One area we can study is the organization of the planets that make up our solar system.

Materials you will need

The following steps (procedures) are to be followed in conducting this activity.

Remember when you read to perform a task:

Take a close look at the portrait you have drawn. The four planets closest to the Sun (Mercury, Venus, Earth, Mars) are known as the inner (or terrestrial) planets. The five planets furthest from the Sun are known as the outer planets (Jupiter, Saturn, Uranus, Neptune, and Pluto). Four of these (Jupiter, Saturn, Uranus, Neptune) are gas giants. Pluto is smaller than many of Jupiter's and Saturn's satellites, and the Earth's own Moon).

Using what you just learned about interplanetary distances from activity 1, draw your prediction of what Earth and Jupiter's orbit paths look like as they revolve around the Sun. Be sure to label the Sun, Earth, Jupiter, and their orbit paths. How do the orbits you draw now compare to your first predictions of these orbits, before you completed activity 1?

You and your team of NASA scientists have been asked to investigate two new planetary systems discovered around neighboring stars. These systems were actually discovered in 1995 and 1996 from real data. You are asked to investigate the orbit that each travels as they revolve around the central star. Compare your results to the data obtained from our own solar system. Analyze each orbit path and compare their size (distance from the central star), and shape (eccentricity) to complete the following activities.

Activity 2: Mapping Planetary Orbits: The Solar System and Beyond

Materials you will need

Planetary orbits are usually described in terms of eccentricity (e): how much an ellipse varies from circular. You drew the ellipse around the two straight pins. The two points round which an ellipse is drawn are called the foci. The eccentricity of any ellipse is determined by dividing the distance between the foci (d) by the length of the major axis (L). See the diagram below.

Add the following information to the data chart below by measuring the length of the major axis (L) of each planetary orbit in cm.

Lay your three poster boards on your table and answer the following.

Since you are a NASA scientist, you have been asked to write an article for Astronomy Today, summarizing your findings from the activities you have completed. The editor of the magazine would like you to share your information with other scientists as they continue to discover new planetary systems.

How can the information obtained from the activities (scaled portrait, mapping orbits, calculating eccentricity, and determining distances of planets from their stars) help scientists compare new planetary systems to that of our own solar system? Scientists think life may evolve on planets with similar distances and eccentricities as Earth's orbit. Discuss this possibility in this article.

Think about how the information obtained from the activities help scientists in the future as they discover new systems.

Think about how the information collected can be compared to what we already know about our own solar system.

Have the students share their informative writings with the rest of the class. What are the main differences between our solar system and those found around other stars? Do the two new systems seem like good candidates for extraterrestrial civilizations to have evolved? Discuss.